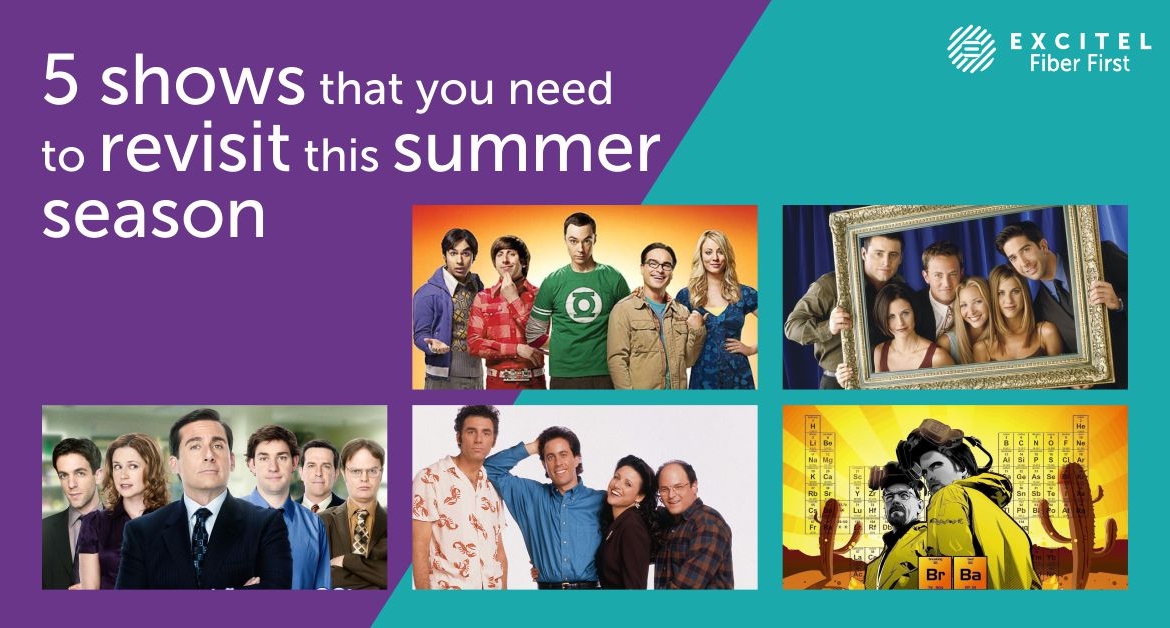 5 shows that you need to revisit this summer season

The talk of the town this summer is all about the F.R.I.E.N.D.S reunion. The gang is back and so is the much-loved street, the memory lane. With the country still under partial lockdown, there has been a significant increase in the consumption of OTT content. Keeping the spirit of reliving your childhood memories, here are 5 shows that will give you a guaranteed trip down memory lane with the help of a strong fibre broadband connection.

The unrealistic expectations of looking for cameras at your workplace, hoping for a Pam-Jim kind of office romance and conference room meeting with a funny boss like Micheal Scott has shaped our idea of a workplace. The series is filled with different characters that play a unique role that add a different layer to this popular American sitcom.

The Office is the heartbeat of all popular TV programmes and its references are often used as a base for many workplace banters. Get your grill on and start smoking some bacon, because it’s time to return to Dunder Mifflin’s Scranton branch this weekend with a Dwight-like steady and strong broadband internet connection.

Our whole universe was in a hot, dense state when the trio, Sheldon Cooper, Rajesh Koothrapali and Howards Wolawitz were playing dungeons and dragons online under self-quarantine.

The Big Bang Theory is one of the most iconic shows that we grew up with. Penny’s warmth, Sheldon’s frank behaviour, Leonard’s sarcasm and Rajesh & Howard’s friendship has had a huge impact on how our personality has developed over the years. The show is filled with science, sarcasm and superhero references, a trio that never fails and sarcasm, a combination that never fails. Revisit CalTech University this weekend and let Master Sheldon give you a crash course on how to ensure a germ/bacteria/virus-free environment only on the episodes of The Big Bang Theory on your nearest TV powered with a fiber broadband connection.

Jerry Seinfeld popularised the trend of stand up comedy and stand up comedians in the world. The TV show is conceptualised around Jerry and how his friends deal with everyday life New-York situations that even we in India relate to. The different personalities and the quirky conversation is the life of the series.

If OTT was a thing back then, we can imagine Jerry Seinfeld saying in one of his stand-ups, “So what is up with TV and fiber broadband internet? You click a button and you can watch a rerun of Seinfeld without any breaks. It is strange isn’t it, we don’t have to stop at an overcrowded Chinese restaurant before the movie, we just click a button and stream the tv-show with no illegal connections needed to be installed by the Russian men.”

How I Met Your Mother:

Ted’s a hopeless romantic, very much like Yashraj’s Rahul of the Western television industry who has set course on a journey to find the love of his life.  HIMYM beautifully captures the protagonists late 20’s to early 30’s filled with different relationship and friendship led anecdotes. Filled with Barney’s sarcasm, Robin’s sass and Marshal & Lily’s warmth, the show is a legend-wait for it-ary window from reality.

Buffoonish Peter Griffin and his family with their anthropomorphic pet dog, Brian in Rhode Island Town is an iconic setup for the Millenials. The show is full of goofy comedy, sarcasm and witty one-liners and spins around the amusing situations that Griffin family is faced with on a daily.

“Gosh, It’s Not Like The Internet To Go Crazy About Something Small And Stupid.” Well, you wouldn’t know what this means if your broadband connection offers a lightning-fast speed

Friends are true to its theme song, it is there for us when we don’t know what to stream. Just a simple show that has managed to create some of the ‘larger than life’ iconic characters and a bunch of hilarious one-liners that we still tend to use to this date. We have grown aspiring to have a clique like Chandler, Joey, Monica, Rachel and Phoebe, wishing to be more like these characters and taking every Buzzfeed quiz that guesses if our personality is like our favourite characters but always end up getting Gunther or Janice.

After almost 18 years, the producers have released a reunion of F.R.I.E.N.D.S that takes us through a roller coaster of emotions. What better time to revisit the childhood memories by binging on ‘Friends’ and the reunion episode online with Excitel and Zee5